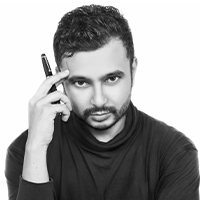 বায়োগ্রাফি : Salman Aziz is a Bangladeshi independent author and artist. He was born in Pabna, Bangladesh. But he mostly grew up in Dhaka city. He is the youngest of his siblings and he has only one elder sister. From a young age, he was a very talented student. Most of the time, he was honored for his excellent results. He obtained his Bachelor's degree in Computer Science and Engineering with remarkable marks. From his childhood, he was very attached to the arts. He wrote many poems and short stories in local newspapers and magazines. But he had to take intervals because of the pressure of studying. He also learned singing. In 2008, he worked as a model in a well-known fashion house in Dhaka named R.M. fashion. He published his debut book, 6th September: A Very Unknown Mysterious Story in early 2017. After a few years gap, he came back with his philosophical book, Bold and Bitter Statements: Volume 1. The book contains his analytical verses and related metaphorical pictures. The book has multiple volumes. Besides writing, he has also made symbolic short films. In 2014 he debuted as a filmmaker. His first short film was Bloody Dark Dream which he released on IMDb. He majorly got recognition worldwide for his multiple international award-winning short film, Lost in the Black Hole. In 2019, he initially screened his film at the 15th International Short & Independent Film Festival, one of the most prestigious film festivals in Europe, Asia, and the American continent. He also got officially selected and nominated for Tareq Shahriar Best Independent Shorts Award (most reputed award for Bangladeshi Young & Aspiring Filmmakers). In 2020, he made its alternate version which got officially selected, nominated, awarded, and screened at various international film festivals. The Ministry of Cultural Affairs in Bangladesh has appreciated Salman Aziz for creating the first-ever symbolic silent cult film in this country and acting in five metaphorical characters. And the director has officially certified it as intellectual property in Bangladesh. He mostly gets motivation from Mother Teresa and Bayazid Bastami. His main aim in life is to do something for the people and be in their hearts forever.